PASADENA--An unsuspected but fundamental genetic rule governing the formation of the cardiovascular system has been uncovered by biologists at the California Institute of Technology. The discovery could influence the development of therapies for both cardiovascular disease and cancer.

According to Caltech biology professor and Howard Hughes Medical Institute Investigator David Anderson, the new findings arrive amid an explosion of new information about the molecular basis of blood vesveins "have to 'talk' to each other to develop properly," says Anderson. The findings may help explain how an intact circulatory system, with the correct proportion of arteries and veins, can be put into place before the heart even begins to beat. The research appears in the current issue of the journal Cell.

By "talking," Anderson is referring to the major finding of the study, which is that complementary molecules found on surfaces of primitive arteries and veins must interact with each other for proper blood vessel formation to occur.

The findings may have broad implications, Anderson suggests. "One should reconsider the molecular biology, pathology, and drug therapies of the vascular system in terms of the molecular differences between arteries and veins." It is likely, says Anderson, that arteries and veins will differ in their expression of many other genes that have yet to be discovered. Such genes may lead to the development of new artery- or vein-specific drugs, or may help to target known drugs specifically to either arteries or veins. Such advances could potentially enhance the efficacy or specificity of blood vessel-directed anticancer drugs such as those discovered by Dr. Folkman. They could also aid in the treatment of diseases that selectively affect either arteries or veins.

Specifically, the Anderson team found that a molecule known as ephrin-B2, present on developing arteries, must communicate with its receptor Eph-B4, present on developing veins. These proteins are expressed by endothelial cells, the first cells that form primitive vessel-like tubules in the embryo and that go on to form the inner lining of arteries or veins. This process appears to be a fundamental interaction for the development of the embryo. If it fails to occur, embryonic development is blocked almost as soon as the heart begins to beat.

The discovery actually occurred when Anderson's graduate student, Hai Wang, was performing a gene knockout experiment to see if the ephrin-B2 gene is essential for the development of the nervous system. When Wang eliminated the gene that codes for ephrin-B2 in mouse embryos, he found no nervous system defects, but did notice that there were defects in the forming vascular system and heart.

The procedure involved the substitution of a "marker" gene that makes cells turn blue where the ephrin-B2 gene would normally be turned on. The result revealed, surprisingly, that the ephrin-B2 gene was expressed in arteries but not veins. Wang then showed that the receptor for ephrin-B2, Eph-B4, was expressed on veins but not arteries. Eph-B4 and ephrin-B2 fit together in a lock-and-key-like manner, signaling each cell that the other has been engaged. This complementarity was seen on vessels throughout the developing embryo. The fact that elimination of the ephrin-B2 gene caused defects in both arteries and veins suggests that not only do arteries send a signal to veins via ephrin-B2, but that veins must also signal back to arteries. The fact that both ephrin-B2 and Eph-B4 span the cell membrane suggests that each protein may be involved in both sending and receiving a signal. 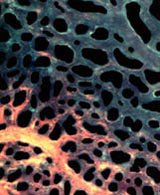