More than 150 people, including Caltech leaders, alumni, students, faculty, and employees, along with other members of the local community, gathered on Thursday, November 17, to formally dedicate the Lee F. Browne Dining Hall, Caltech's central dining facility.

The dining hall was named in the fall of 2021 in honor of the late Lee Franke Browne, a former Caltech employee and lecturer who dedicated his life and career to efforts that expanded students' access to STEM and who advanced human rights. He passed away in 2010, having served for two decades as Caltech's director of secondary school relations and special student programs before retiring as a lecturer in education, emeritus.

Caltech president Thomas F. Rosenbaum noted that it was Browne's own experiences—from his pursuit of a science education from an early age to facing academic, race-based discrimination—that motivated Browne to create opportunities for students of color through the decades that followed. That passion, Rosenbaum said, "was further bolstered by the well-known poet Langston Hughes, who ... encouraged Lee to start writing, helping him to develop a skill that he would take with him for the rest of his career. Most importantly, Lee Browne lived by the Langston Hughes words, ‘I've discovered in life that there are ways of getting almost anywhere you want to go if you really want to go.'"

Bil Clemons, event emcee, the Arthur and Marian Hanisch Memorial Professor of Biochemistry, and chair of the President's Diversity Council, credited Browne with directly bolstering the diversity of the student body during his tenure and indirectly for years thereafter.

"Mr. Browne came to Caltech to find talented students," Clemons said, "and he brought to the table a demand for excellence and a passion for education. Through this, he identified many talented students who came to Caltech as undergrads, including many students of color. This mix of excellence and education is the reason that it is particularly fitting to dedicate this dining hall in his name. This represents a space that everyone on the campus gathers to find camaraderie and talk science. This is precisely what Mr. Browne brought to the campus as well, an inclusive space for all scientists."

Speaking for the extended Browne family, Adriene Tri, the youngest of Browne's four children, described her father as "a man of strength and dedication, whose commitment to our education was paramount. Present here today, our family can see the true impact that his deep commitment to educational excellence had on Caltech."

Beginning in 1968, when Browne joined Caltech as director of secondary school relations, he developed successful outreach programs that encouraged students from underrepresented backgrounds to consider careers in science. He also cultivated relationships with high school counselors at hundreds of schools throughout the region, which, Rosenbaum noted, has helped improve graduation rates among underrepresented students at Caltech.

"Browne set an example that still resonates today," Rosenbaum said. "The newly named Lee F. Browne Dining Hall inspires our undergraduates, our graduate students, our postdocs, our faculty, our staff to realize their full potential and to make our community and our world a better place through their examples."

The dedication was the culmination of the hard work of many Caltech students, faculty, staff, alumni, and others who came together to reflect on and deliberate about Caltech's past and to help chart a future that reflects and supports the Institute's continuing commitment to cultivate a thriving, supportive, and inclusive community of scholars.

During the ceremony, held at sunset in the courtyard in front of Browne Hall and lit by strings of overhead lights and lanterns, alumnus Greg Gibson (BS/MS '77) recounted how many of his friends and family received Browne's encouragement and aid getting into college and graduate school.

Fellow Caltech alum Karen Maples (BS '76), who is also Gibson's wife, echoed his sentiments, saying that Browne "was an administrator who really wanted us to really take advantage of the opportunity that Caltech could afford us. He really wanted to have a community of African American students and other minorities so we could really succeed at this place."

Patrick Cahalan, manager of technical operations for the computing and mathematical sciences department and also a Pasadena Unified School District board member, praised Browne's outreach to local schools as an ambassador for math and science, giving younger students in the larger community "a chance to see what being a scientist is really like" and paving the way for the kind of work that Caltech's Center for Teaching Learning and Outreach would do in recent years.

He added, "I have, historically, not been a fan of naming places after people. The American society has a tendency to skew a certain sort of way in doing that. And I'm glad that our national conversation has turned around to reflecting, honoring work and not people. Mr. Browne did honorable work, and he deserves the honor that he's getting here today."

Alumna Lauretta Carroll (BS '77), who could not attend the event, sent a letter to Browne's friends and family, recalling Browne's importance to her and her fellow students, writing: "Lee Browne was our rock. … In 1972, there were around 800 undergrads on campus, perhaps as many graduate students. In that entire population, there were only three black women. The three of us kept Lee Browne close. He was our shield in times of need. He was a mentor and a defender. He was a fatherly friend."

She concluded, "We loved Lee Browne. All of us." 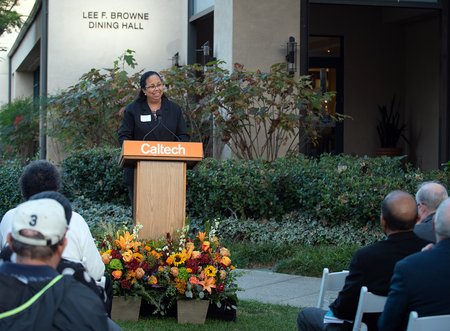 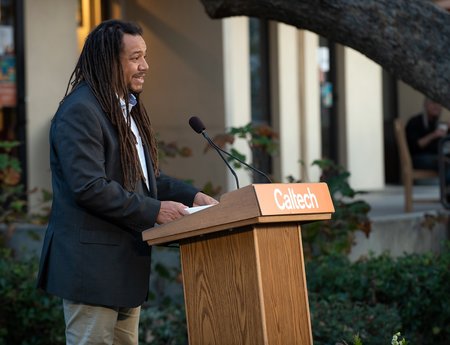 Bil Clemons, event emcee and chair of the President's Diversity Council, describes Browne's passion for education and finding the most talented students to bring to Caltech. Credit: Lance Hayashida/Caltech 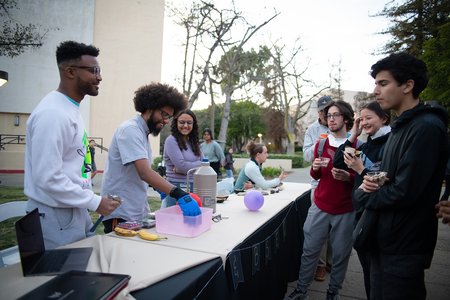 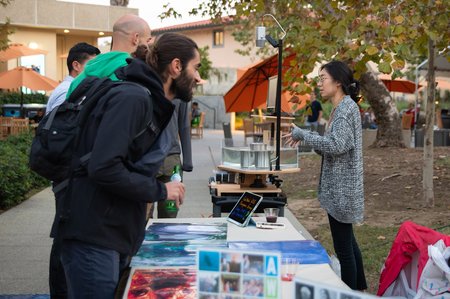