A Conversation with Magdalena Zernicka-Goetz

The idea that you—your heart, lungs, brain, and entire body—started out as one single cell is a mind-boggling concept. Just as astonishing, what happens in an embryo's first few days of existence sets the foundation for a person's entire life.

Magdalena Zernicka-Goetz, Bren Professor of Biology and Biological Engineering, recently joined the Caltech faculty to study the processes that guide early embryonic development. We sat down with her to discuss her research, the importance of mentorship, and coming to Caltech.

What do you study?

I am trying to understand what happens during the first few weeks of human life after an egg is fertilized. We generate from one single egg into many cells, and each of our cells chooses a kind of specialty—becoming part of the heart or brain for example—and they talk with one another to build something more complex than the sum of the individual cells. In other words, I want to know: How do the cells within an embryo know where to go, what to become, and how to communicate with each other?

I'm particularly enchanted by the concept of plasticity. For embryos, plasticity means that cells have flexible fates—you could take a cell from one embryo part and put it into another, and it would respond and change its path. On the one hand, embryos have a very strict developmental timeframe at the beginning where they are complex and set up the foundations for all the different organs and parts, but on the other hand, their individual components, cells, have enough plasticity to compensate for any losses or damage. This plasticity becomes restricted as development moves on and we would like to know how and when and what can we do to reverse it.

Why is it important to understand this particular stage of development?

Anything that goes wrong at these early stages of development will affect every single function of the future organism. This is the time when the foundation for every single tissue in our bodies is set up. So we want to understand how this foundation is built.

I use mice embryos as a model system. The first days of mouse embryo and human embryo life are extremely similar to each other—they both look like balls of cells and are about one tenth of a millimeter across. But the moment when an embryo embeds within the body of the mother, the development between mouse and human embryos starts to diverge. So, a few years ago, I also started to study human embryos that are donated to us from people who have undergone in vitro fertilization (IVF). We also try to build synthetic embryo models from stem cells to try to understand how life assembles itself.

I'm fascinated by the concept of plasticity—the way that living things can adapt and change. Initially, I was very interested in the plasticity of our brains, such as thought processes and learning. My father was a neuroscientist, and discussions with him when I was a young girl first inspired me to think a lot about the plasticity of the brain.

But ultimately, I decided to go my own path and redirect my interest from the plasticity in the brain to the plasticity that occurs at the very early stages of life. In a way I suppose this career change was an example of plasticity in my own life. So I got my PhD in developmental biology from the University of Warsaw in Poland.

You've also been working on writing a book for non-scientists. What is it about?

Over the last year I worked with a science journalist and broadcaster, Roger Highfield, to write a book, called The Dance of Life, and it's coming out in February. It's about the multipotentiality of scientific life but it's also unexpectedly biographical as it talks about how my life, by a mixture of chance and destiny, became intercalated with science. It's an intermixture among the different things that we all have to do in life—we are each more than one aspect.

To that end, mentoring young women scientists is very important to me. I think it's extremely important to support young, curiosity-driven and risk-taking scientists, and, of course, to encourage more and more women in science.

What brought you to Caltech?

I was very happy with my lab at the University of Cambridge and my group became my second family. But I was open to plasticity in my own life. I felt that it would be a great time to explore something very new, develop different relationships with new scientists, and bring new light to what we are doing. At Caltech, I'm excited about the ability to explore a new path, and also the ability to combine my research on development and stem cells with bioengineering and synthetic biology. This possibility for interdisciplinary work at Caltech appealed to me.

Magdalena Zernicka-Goetz is an affiliated faculty member of the Tianqiao and Chrissy Chen Institute for Neuroscience at Caltech. 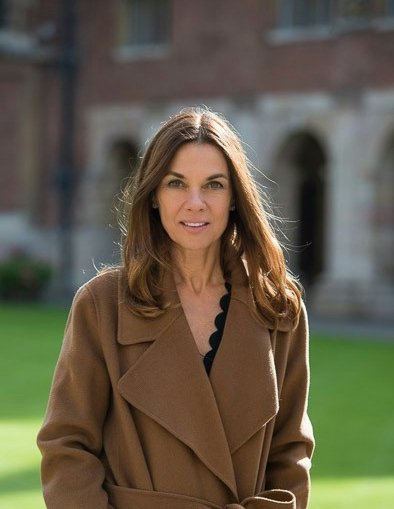