PASADENA, Calif.--If you think it doesn't do much good to swipe the fly that's going after the potato salad, guess again. You may be discouraging the fly's colleagues from taking up the raid.

New evidence shows that a stressed fly emits an odor that makes other flies avoid the space in which the stressful event occurred. Reporting in an advance on-line publication of the September 15 issue of the journal Nature, California Institute of Technology professors David Anderson and Seymour Benzer, along with Professor Richard Axel of Columbia University, discuss their findings about how flies may communicate information about their internal state to one another.

According to the authors, the act of shaking or shocking flies causes a repellent odor to be emitted that contains carbon dioxide as one of its active components. The research involved the fruit fly, Drosophila melanogaster, which has been used for decades in genetics experiments. However, the mechanism could be more widespread.

"We showed that CO2 is itself a potent repellent for Drosophila," says Anderson, a professor of biology at Caltech and also a Howard Hughes Medical Institute investigator.

The researchers also succeeded in mapping the initial neural circuitry that leads to CO2 avoidance. The team, led by Caltech postdoctoral scholar Greg Suh, found that CO2 activates a single class of sensory neurons in the fruit flies, and that these neurons seem to be dedicated to the sole task of responding to this odor. By inhibiting the synapses of these neurons using fancy genetic trickery, the researchers were able to block the ability of flies to avoid CO2, in behavioral experiments.

"These results show that there is probably a genetically determined, or 'hard-wired' circuit mediating CO2 avoidance behavior in the fly," Anderson says.

But even though the research is primarily aimed at furthering the understanding of the neural circuitry underlying innate behaviors, there might also be practical results. For one, the fact that mosquitoes are attracted to their warm-blooded hosts by CO2 exhalations has been known for years.

Although fruit flies are repelled by CO2, while mosquitoes are attracted to it, "given the evolutionary conservation of olfactory mechanisms in insects, if we learn about the molecular details involved in CO2 sensing in fruit flies, it could potentially lead to repellents that act by interfering with the reception of CO2," Anderson adds.

Such a repellent could be of benefit in third-world countries where mosquitoes are vectors of diseases like malaria--or even in the United States, where the mosquito-borne West Nile virus has been a serious health concern this year. 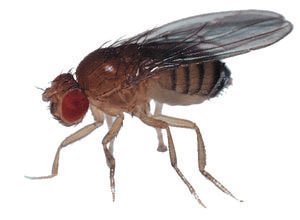